Art knife or pocket one?

Noblie / Blog / Art knife or pocket one?
There are all kinds of collectors in the knife world. Some prefer practical knives while others prefer art knives. Collecting knives is as much of a noble vocation as is, say, collecting books. A knife is a symbol, a combat weapon, a survival tool, and an integral element of the history of Mankind. A knife can split and cut; it can be of practical purpose or be an exquisite item in your collection. One particular quality making knife the most widespread among collected items is its ancient proximity to a Man and the almost magical capacity of this item which invests its owner with power, construed both literally (physically) and psychologically (metaphysically). Owning a beautiful knife is a passion underlying our genetical memory. What kind of knife should you opt for? That is up to you. Over time, the knife has evolved from a mundane item into a work of art but that did not modify its initial, core essence. 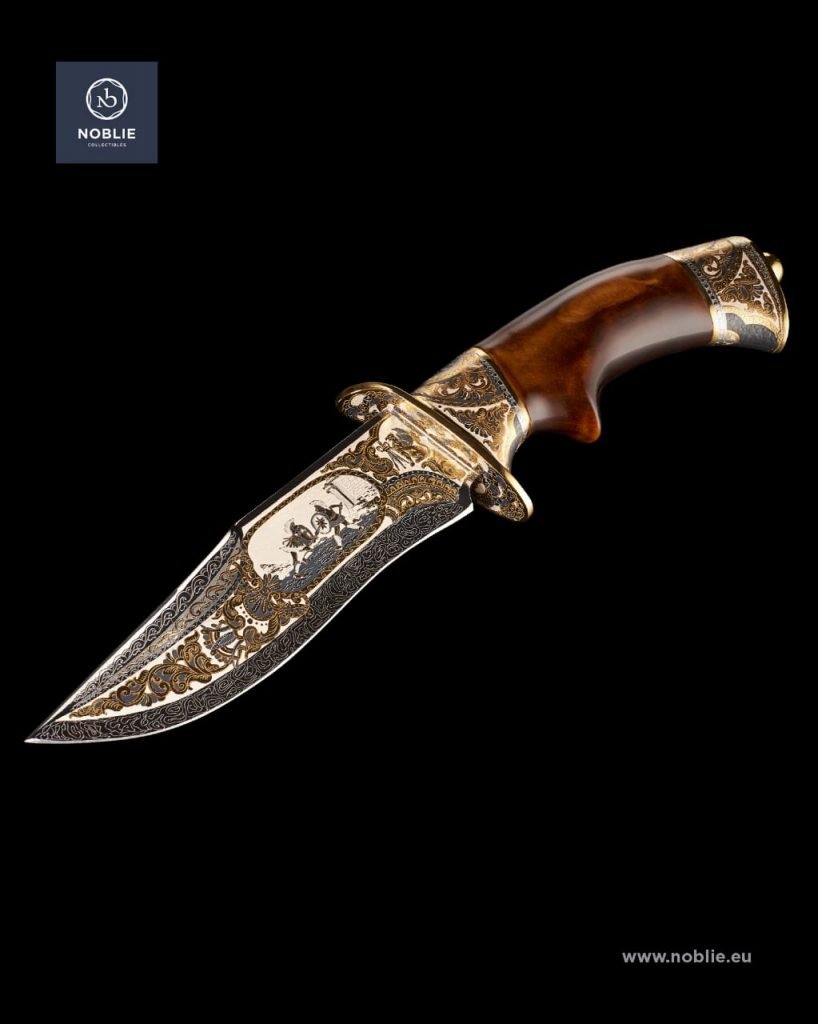 People who consider a knife to be a practical thing only tend to collect professional items. Knife connoisseurs preferring art knives are keen on the symbolism the knife carries with it. It is a good strategy to apply an academic approach to your collecting hobby. Jack-knives have been popular with men of war since ancient times; take, for instance, the Bronze Age when Roman legionaries used knives with blades made of iron, not bronze. Such knives were expensive but very practical: a luxury jack-knife with a solid, durable, and sharp iron blade was, in a way, an insignia of a mercenary. The Iron Age was marked by knives made from Indian and Arabic Damascus steel and gave birth to new legends. In the Middle Ages, carrying a knife was a privilege enjoyed by freemen only; slaves, captives, prisoners of war were forbidden to keep and bear knives. Trade secrets of craftsmen forging Indian Damascus steel were confined to the caste of blademiths who, according to a legend, had once descended from the Himalayan heights. Sword-blades they created out of Indian Damascus steel could easily penetrate the armour worn by the servicemen of Alexander the Great. Later, during the Crusades, Europeans faced Syrian Damascus steel blades for the first time. At first, the Arabic bladesmiths had purchased the material itself (Damascus steel) from India and only wrought weapons out of it but afterwards, as they figured out the technology of manufacturing, they started producing their own steel which they used to produce reliable and aesthetically admirable weapons; they did, however, fail to surpass the intricacies of Indian Damascus steel. Damascus steel is used to produced the best, top quality knives. They may fall into the category of practical, professional items or, to art knives that are so carefully preserved behind glass windows and caskets of museum exhibitions and private collections. Knives carried by hunters, pirates, and navy seals are practical items but possess their peculiar aura when in action. Collection knives with practical characteristics fall into one of the following categories: Survival Knives, specifically: • Combat knife; • Hunting knife; • Hiking knife; • Army knife. Sport Knives, particularly: • Throwing knives; • Knives for diving sports. 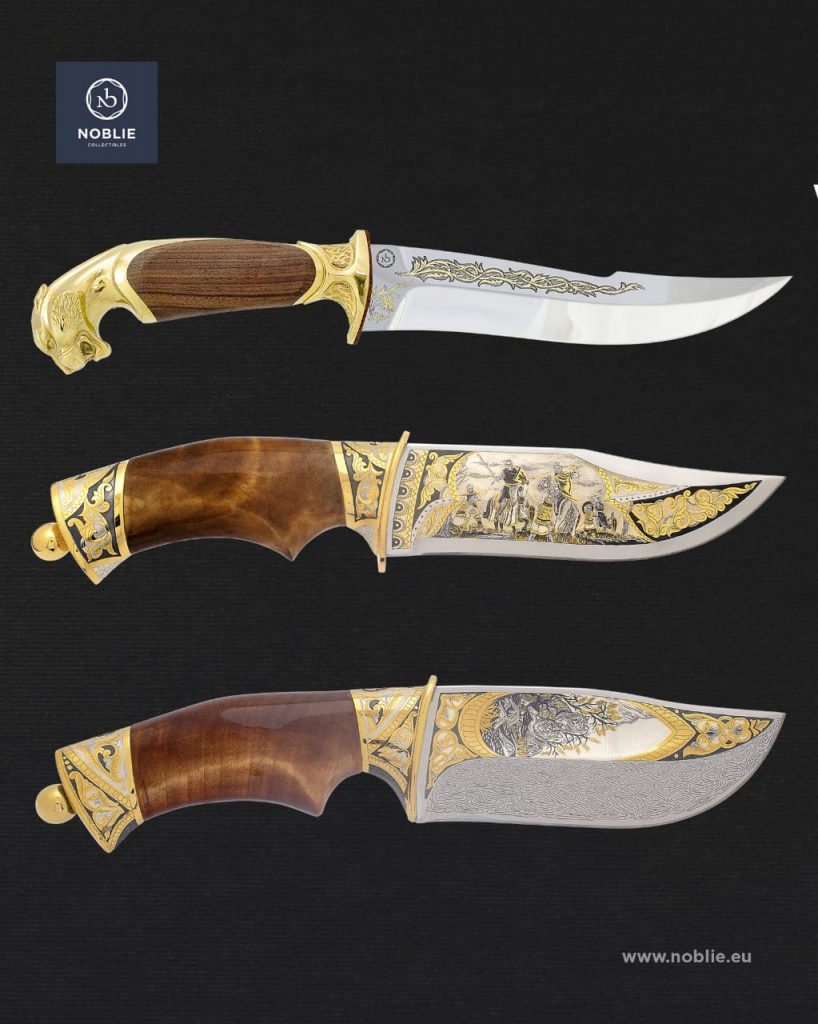 Art knives manufactured by renowned artisans are very expensive, largely due to the personal history each respective craftsman boasts. Not only the material used to create the knife is of value but also the embellishments and the artistry of bladesmanship. The unique and inimitable manner in which every item is produced are held in even higher esteem, particularly if the artisan has, alas, already passed away in which case the value of the item in question may increase immensely. To crown it all, knives by and large are items that may be admired endlessly, as one reveals brand new nuances pertaining to this object that is so rich in symbolism. A quotidian hobby that may or may not emerge in connection with one’s professional activity and may begin with appreciating the strictly practical qualities of each particular knife may well grow into ardent collecting of art-knives, with a peak into the realms of both private and sacred. The material, the insets, the embellishments—everything down to the casket used to store and preserve the knife each of these elements is meaningful and not at all coincidental. Custom-produced knives, of which but a single copy exists, live to become works of art that have been created by their unique master, and remain both physical objects and symbols of a certain school of art. Certain collectors may well get in shock at the prospect of seeing anyone dare use such a chef-d’œuvre to dress meat or cut twigs for a camp fire. A jack-knife, same as a knife on an ornamental frame with a set blade may very much be a work of art. But can the famous masterpieces made by Jack Levin or Antonio Fogarizzu really be on a par with knives produced by humble sailors, soldiers, or hunters?

Each and every knife is produced by a craftsman for a particular purpose, the essence of which may be boiled down to one of the following: survival (any jack-knife owned by a tourist or a hiker), hunting (any hunter’s knife), combat (an army knife etc) or a ritual knife kept and born by high priests or suchlike—each of the above categories is rooted in the ancient times. A knife is not deprived of its initial symbolism—even if it is used to cut bread, it remains a weapon nonetheless—although the artistic style of each particular knife may remind its owner of the initial purpose for which it was designed. Knives made to order or as unique self-inspired items are always special. Not every knife can leave heads spinning. That said, survival knives may lack decorative elements but their shape can make one stare at such knives for hours and hours and evoke a lot of emotions.As one admires ritual knives dating back to certain historical eras, one can see that these are not characterised by any specific artistry of craftsmanship but can nonetheless impress a knife connoisseur.

Appleton Father and Son used to create amazing mechanical knives to orders. Another established authority in the art of knife-making is Jeff Harkins whose collections of automatic jack-knives are masterpieces of fine arts in the realm of knife-making. The Noblie knives may be compared to jewellery. These are symbolic objects that may become premium-level presents to anyone, not only to collectors. It is, however, quite possible that if and when one receives such an item as a gift, one might venture to regard a knife as something more than merely a knife. Noblie is engaged in the cause of creation of works of art evoking profound reverberations exceeding the boundaries of transient feeling of elation. A collector’s passion is, after all, propped by an in-depth interest in and extensive knowledge of the subject. An art knife created by a true bladesman is capable of overwhelming its owner and winning his or her love and admiration. A distinctive trait of such a knife is the appelative artistry of its appearance, specifically: • the engraving of the blade; • the insetting of the handle wherein gemstones and precious metals are used; • the sophisticated technique of blade embellishment: oxidising (blackening), etching, gold plating; • the presence of intricate mechanisms; • the technique of craftsmanship being a trademark of a unique bladesman; • overall unique nature of each specific item. All of such approaches are meant to turn a knife into a variety of jewellery of sorts, and are bound to turn the owner of such an artifact into a custodian or a guardian of a symbol for which they stand. Art knives created in a single copy merit separate attention: these are particularly valuable for any collector.
Related materials 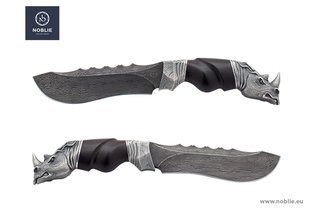 Our beautiful collection
Collection edged weapons are attractive in that it is not made for military operations, but as a ceremonial accessory, as a reward or a gift.
Read 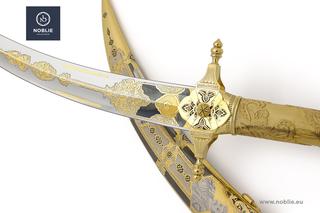 Dagger “The Great mughals”
The dagger ”The Great Mughals” is unique masterpiece of decorative edge weapon making. The whole process is handmade and it is modeled in traditional Moghul design with rich decoration. This dagger is complicated work of art, divided into four remarkable parts.
Read 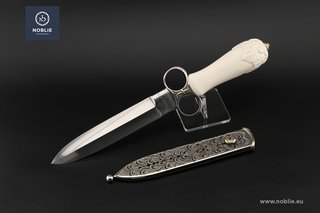