Dagger is a type of knife with a short, often straight blade that is double-edged and tapers to a sharp point. The dagger has been used all around the world since the Stone Age as the primary type of knife for close combat. However, in modern times, the combat use of daggers has become obsolete, and these blades – especially antique or semi-antique, fancily-shaped, vintage daggers – are now seen mostly as art objects and collector’s pieces. Collecting daggers provides you with a rich assortment of options, as the world of daggers comprises many various, particular designs from many cultures. Let’s dive into the universe of collectible daggers to explore what is worth of true connoisseur’s special attention.

The variety of collectible daggers

Daggers have been known in many parts of the world since ancient times. The dagger was quite popular over the course of history, as it was easier to carry and its smaller size made it more convenient than a sword. Various cultures have developed their very own types and designs of daggers, reflecting the national spirit and traditions of each of them.

A symbolic and ceremonial meaning of the dagger had been developed in some cultures, making the dagger a symbol of manhood and dignity. The symbolic status of some daggers is preserved in some military and folk traditions even nowadays – like that of the Scottish dirk or Arab jambiya. Dealing with various types of daggers from different cultures, you get to know the symbolism and traditions of each of them.

Each of the historical, vintage, art daggers is a piece of art worthy of being displayed for decorative purposes in a most elegant interior. Each of them can be a valuable addition to a most prestigious collection. So, let’s unpack the most peculiar categories of collector daggers known today.

Budding collectors would often start buying cheaper, mass-produced daggers. They are easily available, and collecting them does not require much investment. However, these volume production items do not feature a quality standard that can be found in high-end, custom daggers. Starting with simpler, mass-produced daggers, a collector would often become bored and dissatisfied by their modest quality and appearance, and would start looking for daintier pieces. This is where semi-antique, cool daggers come in.

These daggers feature quality and decoration standards unreachable by mass-produced daggers. A semi-antique dagger is hand made, often as a one-of-a-kind piece to customer’s order or in a limited batch. Such daggers feature an outstanding quality of materials used – such as rare wood, bone or precious metals, an excellent richness of embellishment and a superior handicraft.

The hunting dagger is man’s oldest companion. Many thousands years ago, hunters concluded that they needed a short thrusting weapon that is easy to carry and wield, and the dagger was born. Nowadays, a long (18 to 30 inches) dagger often comes by the name of the ‘hunting dagger’: this type originated from fancy hunts of the German nobility.

Custom daggers are hand made, often in a unique copy, and feature an uttermost quality of materials and craftsmanship. Lavishly adorned with enamel coating, gilding, gems, inlays, engraving or other artistic elements, these daggers often revive a historical epoch or style and are magnificent pieces of art.

Damascus steel was used in daggers in the Middle East since ancient times, as this steel is known for its excellent service properties, such as toughness and edge retention of the blade. Even today, Damascus is traditionally used in high-end, vintage daggers and knives. Custom Damascus daggers are very durable and keep a keen edge even with multiple uses.

Engraved daggers are another style of aesthetic daggers. Engraving is found on high-end custom daggers, and is considered one of the biggest value additions to a quality knife. While machine engraving is widely applied today for mass-produced items, hand engraving is rare and mostly used by seasoned masters devoted to crafting custom handicrafts. Engraving serves many purposes: a knife is identified or branded with a maker’s emblem or bladesmith’s name; a blade can be personalized by carving/etching owner’s name, an emblem, a logo, or another symbol referring to owner. And daggers are engraved with those minute scrolls, leaves and ornaments just to adorn the piece and make it look ornate.

Some cool daggers can combine the above features: for instance, a hunting dagger may be crafted in an antique style, or a Damascus dagger can be adorned with engraving. Let’s look at the most common types of collector daggers from around the world to see what is deemed to be most peculiar and sought-after by dagger lovers.

Daggers come in different sizes, designs and shapes. Blades may be straight or curved. The style often depends on the origin of the dagger and reflects the cultural tradition it belongs to. Many places in the world are known to have given origin to some peculiar designs of daggers – like Scottish dirk, Japanese Tanto, or Omani Khanjar. Let’s look at the variety of styles the world of daggers has to show.

Some examples of historic European daggers include:

Poignard or poniard: a long, lightweight thrusting knife with a continuously tapering blade, historically worn by noblemen or knights.

Rondel dagger: a stiff-bladed dagger popular in Europe from the 14th century onwards, used as a utility tool or as a weapon by a variety of people from merchants to knights.

German Hunting dagger: a long (18 to 30 inches) dagger originating from fancy hunts of the German nobility.

These fighting daggers were primarily used by knights and warriors, hence their name. It was a tapered dagger with a down-turned guard with beaded terminals, popular throughout the Middle Ages. The sturdy tapering blade was good for stabbing, while the down-turned guard allowed to parry and block enemy’s strokes, which was crucial in close combat.

A jambiya is an Arabic dagger that has a short curved blade with a medial ridge. It originated in Yemen and have spread over the Middle East and South Asia. Its curved blade is devised for mighty slashing strikes, while the central ridge running across the blade on both sides gives the jambiya an excellent degree of sturdiness. For centuries, jambiya knives have been a symbol of social status in Yemen and other Arabic countries.

A khanjar is another traditional Arab dagger with a short curved dagger. It originated in Oman and has since spread to the rest of the Middle East, South Asia, and the Balkans. Once a defense weapon, nowadays the khanjar is used solely for ceremonial and practical purposes. The khanjar, a symbol of national pride in Oman, appears on the country’s flag and currency.

Stiletto is a dagger with a long slim blade, primarily used as a stabbing weapon. It arose in the 15th-century Italy. Its slender blade was tapering gradually to a needle-pointed tip, thus reducing friction upon entry, which made the stiletto a perfect dagger for thrusting and stabbing.

A kindjal  or a khanjali  is the Caucasian long dagger or short sword, the traditional weapon of the peoples of the Caucasus and Transcaucasia. It has a wide, straight blade and usually has no crossguard. The khanjali is a secondary weapon and the traditional attribute of the inhabitants of Caucasus and Cossacks since ancient times.

A quillon is an individual bar on the either side of the crossguard. A quillon dagger has a guard with two forward-pointed faceted quillons. A slightly downturned guard is typical of these medieval daggers: it was used to parry enemy swords in close combat. They emerged around the 12th century and were common for knights and warriors over a long period of time, even up to the 18th century.

A dirk is a long-bladed thrusting dagger. Historically a symbolic traditional and ceremonial weapon of the Highland warriors, the dirk made its way into the naval ceremonies in the 19th century, and is worn today as a badge of office by naval officers in various countries around the globe.

Collectible daggers come in many forms and styles. Avid collectors may emphasize dagger’s shape, or origin, or tradition it belongs to, when adding another piece to a collection. True knife adorers know: if you’re looking for a genuine collectible, you should look for the best quality. High-end knife purveyors, such as Noblie Store, offer upscale hand made daggers, from various epochs and cultural traditions, that may become a centerpiece of your collection. 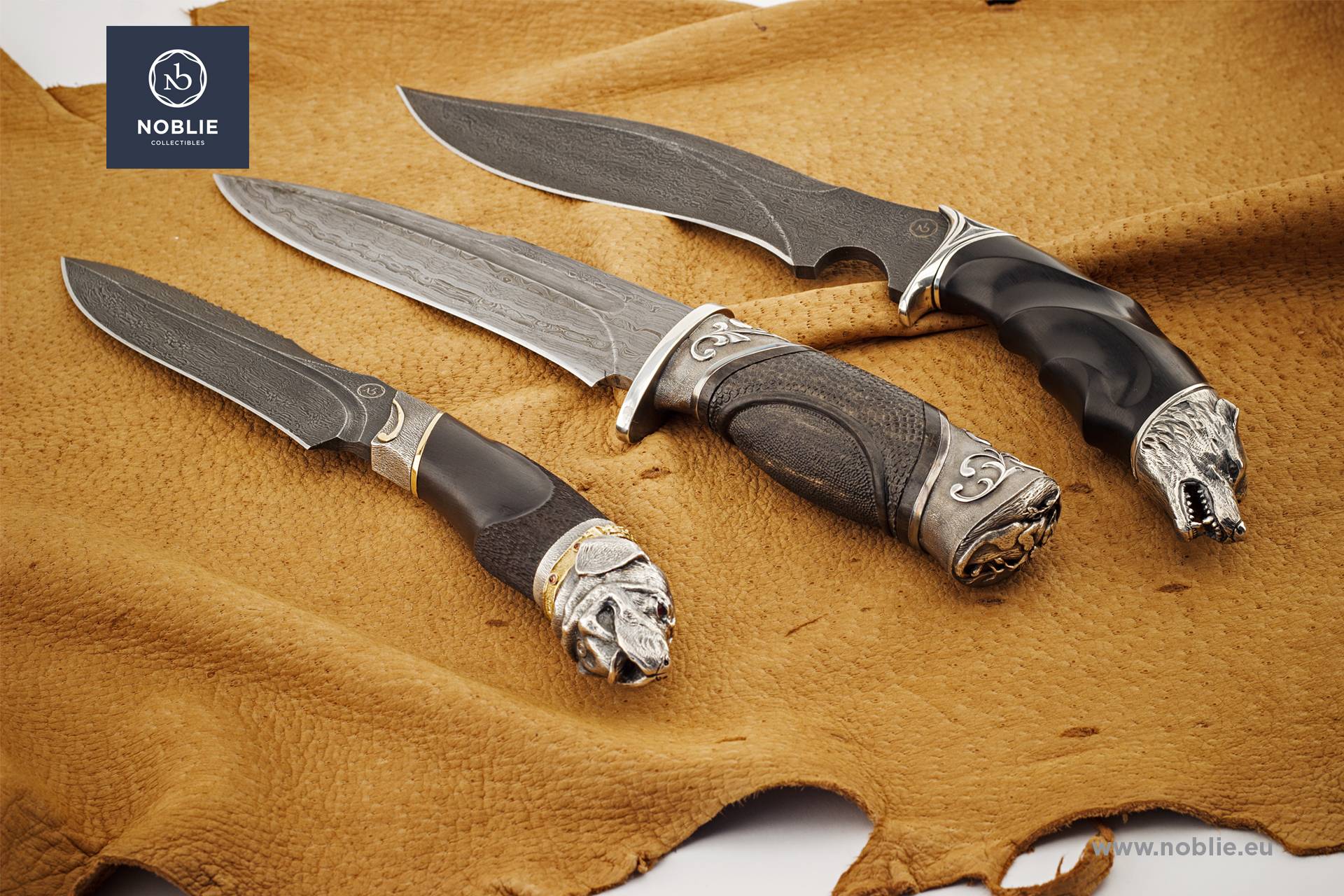 How to properly care for a Damascus knife
Damascus steel is one of the most unique materials due to its unusual appearance (unique patterns on the surface of steel), significant strength and excellent cutting properties. Such steel is excellent...
Read 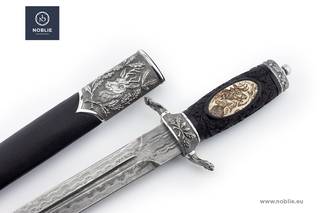 What is a dagger?
A dagger is a basic thrust weapon. It has a short blade and is held with one hand. Chiefly, a dagger is used to strike jabs, however, some daggers can cut, like kitchen knives. The dagger has been used since the Stone Age. It is a primary type of edged weapon throughout the entire world.
Read 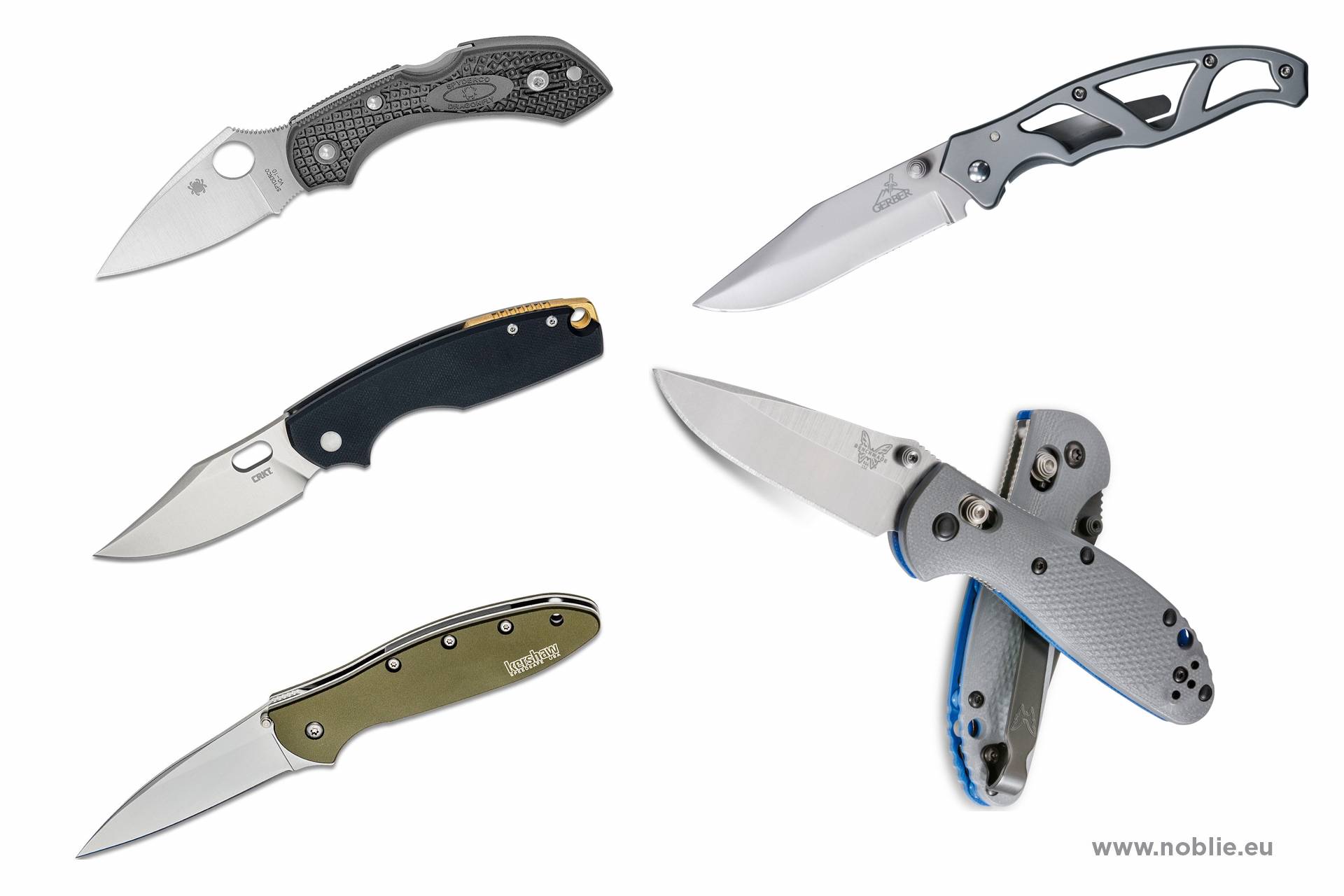 BEST POCKET KNIVES WITH CLIPS
A pocket knife is a handy tool to have on hand for a variety of tasks, whether it be for everyday use or outdoor activities. One of the most convenient features of a pocket knife is a clip, which allows for easy and secure storage in a pocket or bag. A pocket knife with a clip is useful because it is easily accessible, making it a perfect tool for everyday carry, or EDC.
Read
Rating: 4,7 - 48 reviews
Read all customers reviews of Noblie knife store