The dagger ”The Great Mughals” is unique masterpiece of decorative edge weapon making. The whole process is handmade and it is modeled in traditional Moghul design with rich decoration. This art dagger is complicated work of art, divided into four remarkable parts. 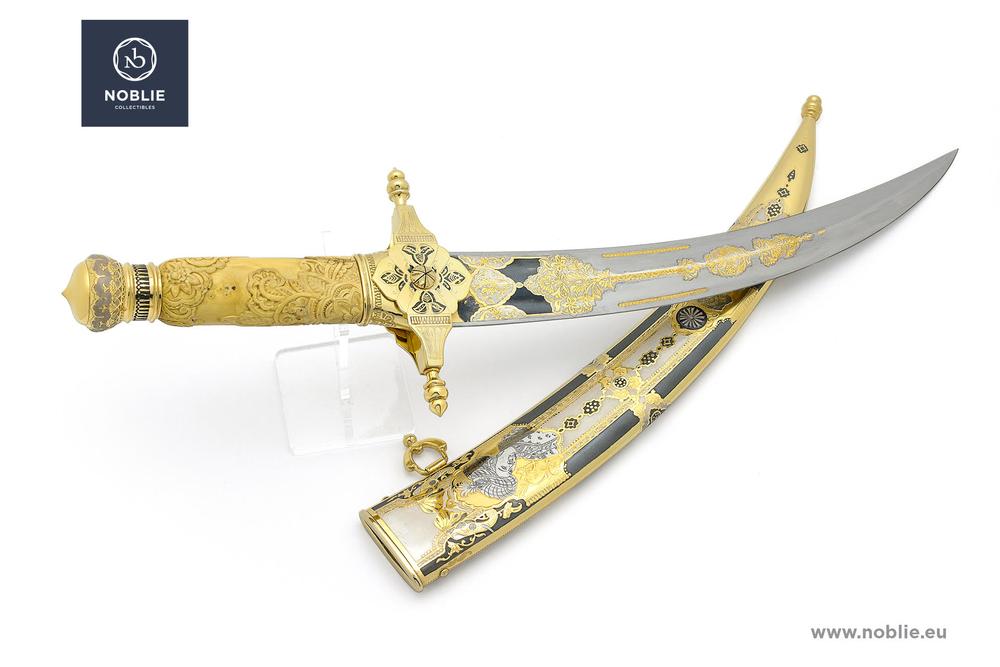 The blade is forged from hardened stainless steel. It is curve shaped, two sides sharpened and ends with pointed peak. The beauty of the decoration is achieved by using different metalwork techniques. There are floral ornaments in oriental style, depicted in the both sides of the blade and they are made by etching, engraving and gilding. Two yak’s head, opposite one another, are engraved close to the guard. This figure repeats on the both sides of the blade.

Bellow the yak’s heads, on the right side of blade, there is miniature of blooming water lily. On the left side, at   the same place is engraved Noblie company logo. 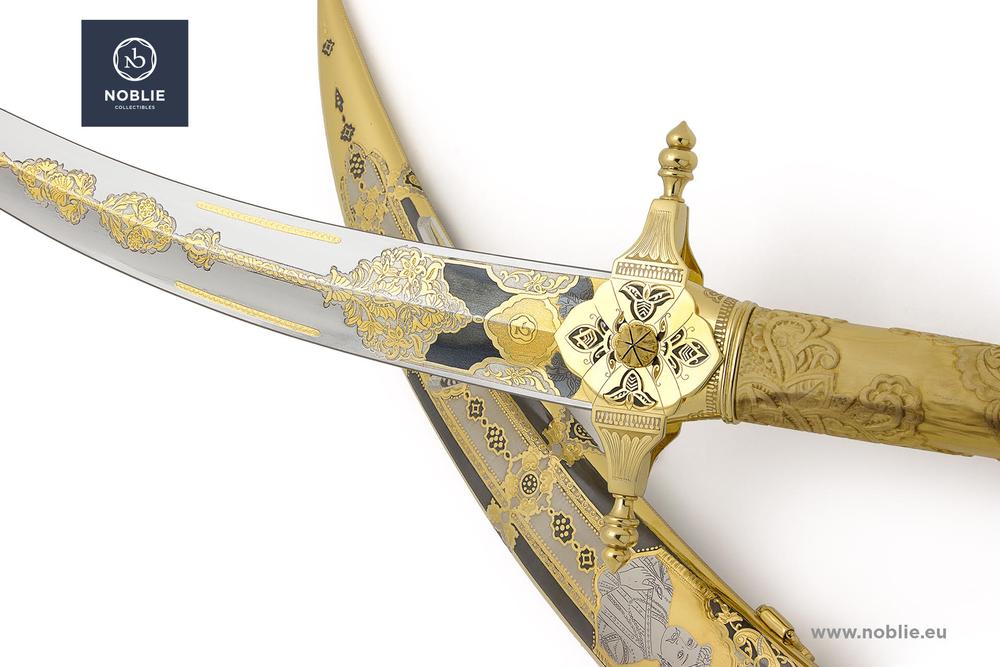 The guard is formed as a lotus leaves. This flower, the Orient symbol of purity and perfection, gives the main shape of the guard. Two mosque’s minarets sideways are the quillions. The entire guard composition is gilded and has very fine engraving.

The handle is other impressive part of the dagger. The grip is made of   boxwood and it is very accurate engraved. It should be paid attention to the pommel, which is emblematic for the whole dagger, because it has the shape of Taj Mahal’s mosque-one of the most significant monuments of Mughal culture. Gilded and rich decorated, the pommel ends with miniature minaret instead a traditional ball. 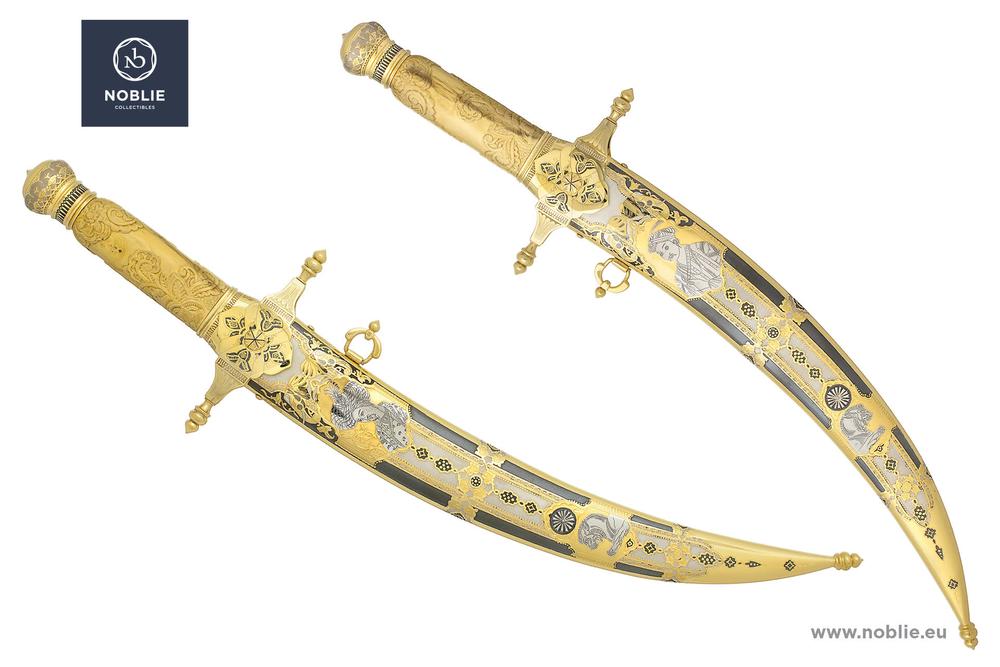 The sheath is the most exciting part of the dagger because of the complexity of its implementation. Its two sides represent different scenes of one picture, dedicated to the Moghul Empire /1526–1857/, a Muslim Persianate dynasty of Chagatai Turco-Mongol origin that ruled parts of the Indian subcontinent and Afghanistan.

The left side of the sheath performs the richness of   art, a mixture of the cultures of Persians, Mongols and Muslims. There are two miniatures – one is portrait of Akbar the Great –one of the most powerful ruler of Mughal dynasty and the repeating depiction of yak’s head-an animal of very big importance for the people of Central Asia. The two miniatures are made by precisely engraving and needle notching and they are surrounded by gilded backgrounds with floral motives. The circle, as a symbol of the sun, movement and infinity, presents on both sides of the sheath 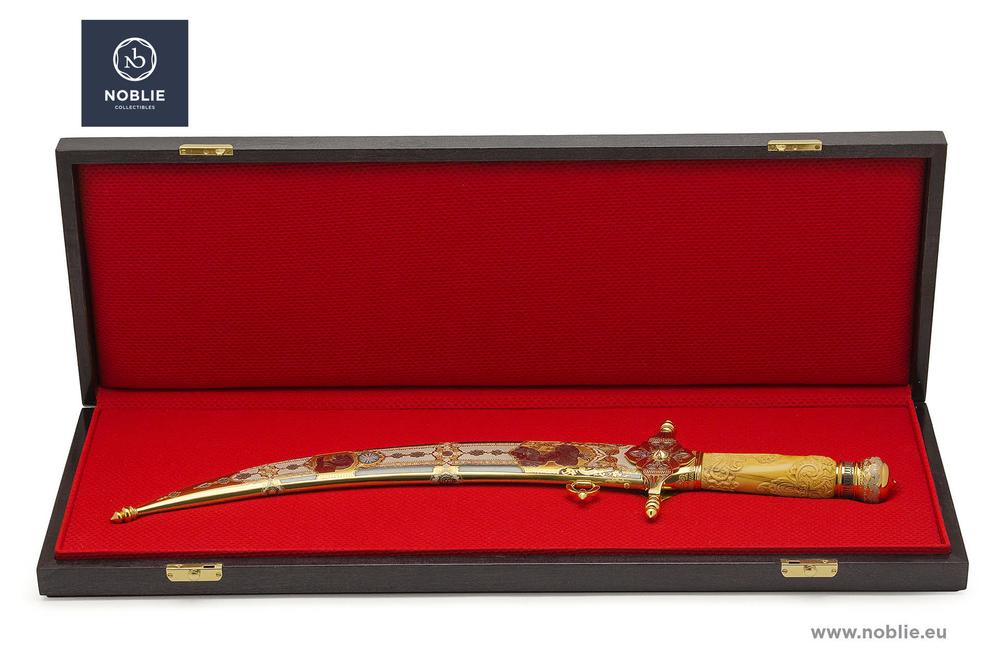 Traditional Oriental ornaments and numerous   dots are placed on the sheath in horizontal and vertical lanes. They are made by etching and gilding. Polishing and brush painting are also used for decoration.

The right part has the same ornamental decoration but the difference here is of the depicted miniatures. The portrait on this side is of the founder of Mughal Empire –Babur and the figures of yak’s head and the circle are repeated again. The decoration techniques are the same as on the left side and they show off the mastery of craftsmen to create an art work from a dagger and its scabbard. The sheath ends with element that reminds a peak of mosque’s dome and has a dome shaped hanging ring that embodies the cultural style of the dagger’s depiction. 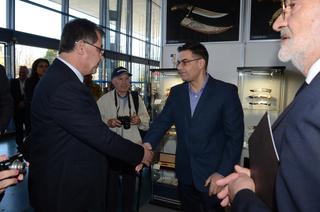 Noblie in Plovdiv
The new exclusive series of handmade custom knives from NOBLIE Collectibles was represented for the second time in Bulgaria, during the “NATURE, HUNTING AND FISHING” exhibition in Plovdiv International fair from 29th of March to 2of April.
Read

Top Hunting Knife
This model comes with a factory sharp edge. The blade retains sharpness for a long time due to the unique heat treatment. It’s best suited for use by fisherman and hunters.
Read 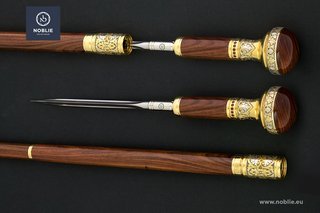