The process of edged weapon making is a kind of magical rite and it starts with breathing life to its “heart” – the blade. In the beginning it is just a piece of iron or iron ingots that should be forged in elegant form. The foundry is the place where the mass of iron is poured out of a furnace as a liquid, the internal structure of the iron is like small spheres of iron piled together like a bunch of somewhat sticky marbles. 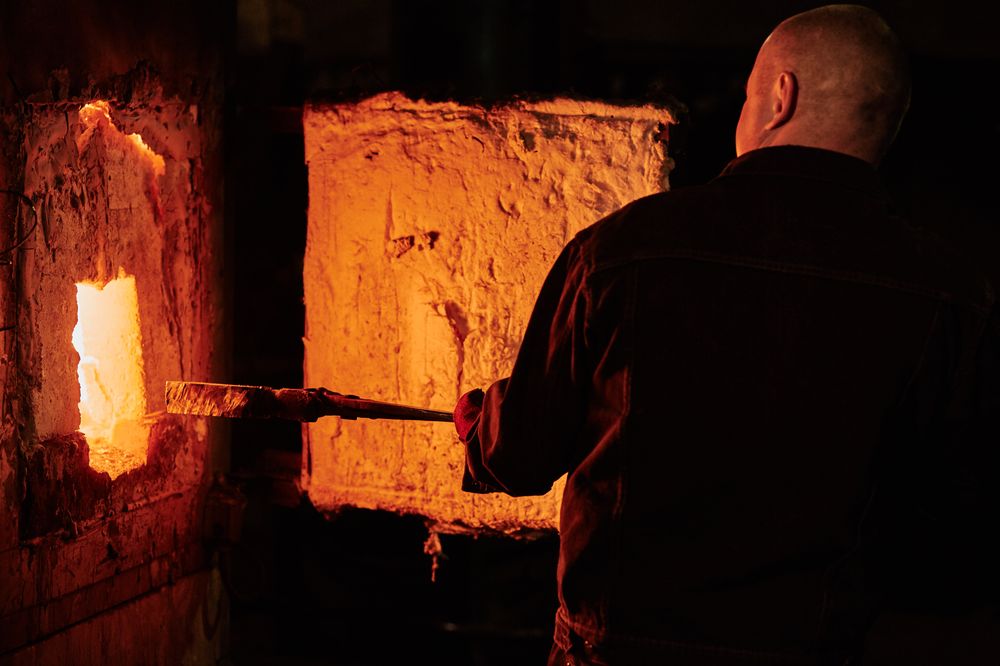 After that the mass is flattened and drawn out into strands by rolling the mass between rollers, or by hammering the iron under a large hammer. This way the iron structure is strengthened, as spheres are loosely connected and more likely to separate, compared to an iron structure of strands that are mutually supportive. The more that wrought iron is drawn out, cut, stacked, welded and drawn out again, the higher is the refinement.

With the hammers and tongs the smith makes the proto-blade, moving the block of glowing metal back and forth between an anvil and a hot coal furnace. It is needed just the right “color” of heat to keep the metal at just the right pliability. 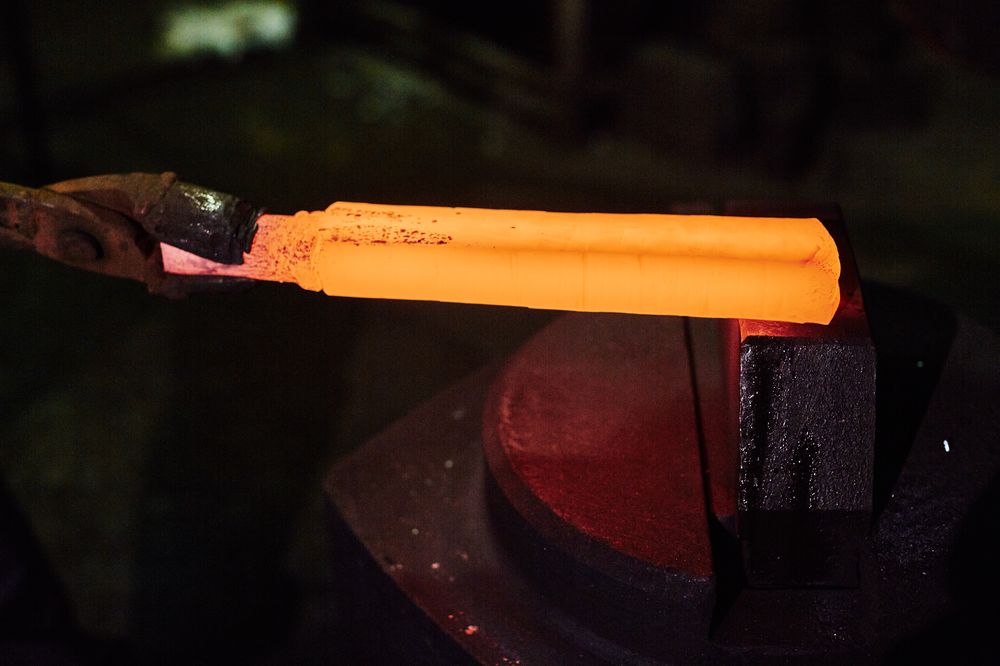 The smith shapes the metal while ir is still red-hot by slowly and repeatedly hammering and re-heating until the length, width, and thickness are done proper. The smith have to shape and mix metals of different   qualities, some softer for the core or sides, some harder for the edge and point. This is done essentially by “sandwiching” harder steel around softer iron so that the blade could flex under sudden impact but resist deformation.  He has to work the sides, edges, and tang into shape, none of which was entirely identical in its characteristics to the others. 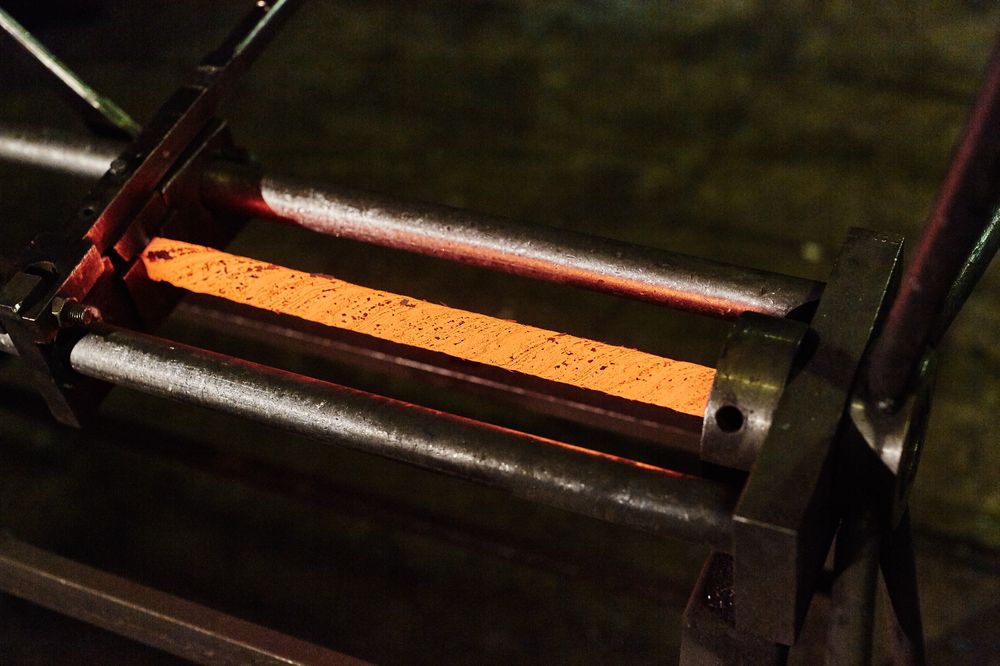 Heat treatment is the final crucial step that gives the blade its strength and toughness. Heat-treating is really the whole process of quenching (or hardening) and tempering (or slightly softening). To gauge the proper heat-treating is perhaps half of the Art of forging.

Quenching is really the fast cooling of the glowing hot blade in order to harden it. To ensure toughness and flexibility the blade must be quickly quenched in either oil or water.

Tempering comes after the quenching and it is really just the low-temperature re-heating of hardened yet still somewhat brittle steel. In essence it’s the “relaxing” of the steel at a low temperature. The higher the temperature or the longer a temperature is applied the more the metal’s structure is “relaxed,” thus making the blade tougher while somewhat softer.

The combined shock of this, followed by the slow re-heating to a low temperature essentially caused the metal’s attributes to change. It is important to understand that the actual results of any heat-treatment would depend greatly upon the qualities of the different types of steel to which they were applied.

When the blade is cooled it is ready to be ground and sharpened (or “polished”). This is where its edge and point would be properly honed by hand. By holding the cold blade against a series of large slowly turning stone grinding wheels of different grains, the blade’s final shape is formed.

It could then be given an edge with smaller stones or hard metal files or blade might also be inscribed or decorated, perhaps by the maker or another artisan (although some decoration might be applied earlier during forging). 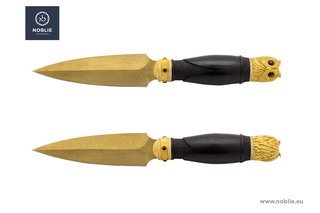 How we make our knives
Perhaps there is no more common object than a knife that can be found in any home.
Read 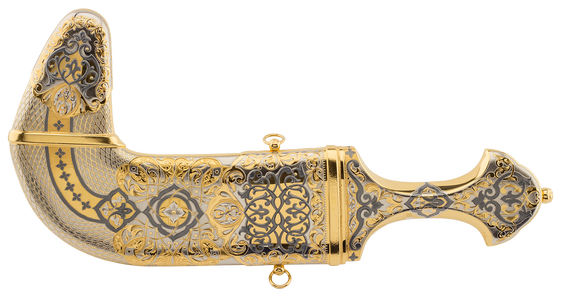 Arab dagger Jambiya
Jambiya is a representative of Eastern culture. These daggers are a family heirloom in the countries of the East, and some ancient samples are more than 100 years old.
Read

Knife collection “Art of engraving” by NOBLIE
We are presenting for your appreciation a unique collection of engraved knives crafted by talented hands. Noblie Masters use traditional techniques such as metalworking, hand engraving, scrimshaw or carving of the mammoth tusk, grinding, polishing, satin finish blade to come up with the most exquisite masterpieces. The blade is forged of steel Bohler N695, and the handle is made of the mammoth ivory and titanium.
Read