The profile of the blade, set during its manufacture, is one of the main parameters that determine the functionality and convenience of the custom knife. To choose or properly sharpen a knife, you will need to know what type of cross-section the blade has. Not only its functionality depends on it, but also the angle of sharpening, and the correct placement of the blade on the grindstone.

1. A blade with convex (lenticular) descents. It is most popular on professional models. It is distinguished by a uniform force when cutting products of considerable thickness. The cutting edge and blade are characterized by the highest strength when cutting and chopping blows. This type of sharpening can be performed exclusively manually, so it is mainly used on expensive author’s blades – high-quality chef’s models, author’s and serial products, as well as on bladed weapons from Japan.

2, 3. A blade with concave descents. This form of descents is also called razor, as it is traditionally used when sharpening a dangerous razor. It has an unsurpassed “primary” cut due to the absence of initial resistance when the blade penetrates into the tissues of the object, however, due to its configuration, it has a relatively low strength and reduced resistance to shock loads. Such a blade shaves well, cuts and incises, but penetrates worse into the product, since the protruding ribs have serious resistance when penetrating into the material. Most often, blades with concave descents are used in knives designed for high-class cutting: razors, skinning and some universal hunting knives, some models of folding and fishing knives.

4. The wedge-shaped profile resembles an isosceles triangle in shape. It penetrates very well into the product, however, due to its own geometry, it has a rather fragile cutting edge. Due to this, the usual straight wedge is quite rarely used in modern knives.

5. A pentahedral profile is a type of cross-section often found in the knife industry, especially in Scandinavian models. Sometimes this type of blade cross-section is called “Scandinavian descents”. It is much more durable than the wedge-shaped profile, but it passes through the material a little worse due to the additional ribs created by the transition between the descent and the sides of the blade. It differs in the simplicity of sharpening.

6. The pentahedral profile of the blade with feeds is the most common type of sharpening in the global knife industry. The totality of the characteristics of such a sharpening is perfectly balanced. The strength of the blade is combined with a high-quality cut. In fact, this is a universal sharpening, which most masters use today.

7, 8. A pentahedral wedge with a feed is another optimal sharpening for a knife, which is sufficiently high-tech in order to provide a good cut to the blade. Often called the European type of sharpening. The strength of such a blade is slightly less than that of a pentahedral profile, and the cutting properties are somewhat better.

9. Knives with one-sided or “chisel” sharpening are highly specialized tools, which are characterized by absolutely special properties. They are most often found in Japanese kitchen knives or skinning knives of various origins. The blades of such blades are sharpened only on one side. On the other hand, the blade remains flat. This geometry allows the master to make the cutting edge as thin and sharp as possible. The precise, directional cut of such a knife is compensated by the fact that with prolonged cutting, the blade can lead away due to the geometry of the blade and the uneven resistance that it meets when penetrating into the product. In addition, knives with one-sided sharpening are not universal for left-handers and right-handers, since with this type of knife sharpening, the descents must be on the side of the working hand.

10. Asymmetric sharpening combines the advantages of two-sided and one-sided sharpening. This is the configuration of the blade, in which the width of the left edge of the cutting edge differs from the right. A similar approach to sharpening is typical for some Japanese kitchen knives, as well as for some craft knives. Such knives are designed for cutting thin slices or cutting chips. 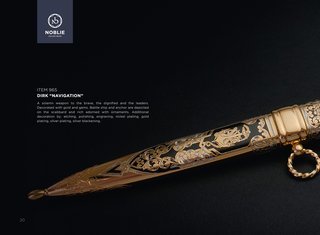 Collectible dirk for sale
Dirk «Admiral». A solemn weapon for the glory and the honor of brave and volitional person, able to lead through the stormy seas.
Read 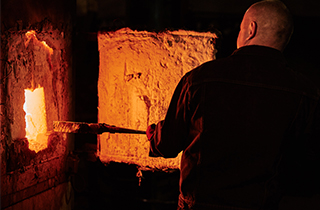 Forging Process
The process of edged weapon making is a kind of magical rite and it starts with breathing life to its “heart” – the blade. In the beginning it is just a piece of iron or iron ingots that should be forged in elegant form. The foundry is the place where the mass of iron is poured out of a furnace as a liquid, the internal structure of the iron is like small spheres of iron piled together like a bunch of somewhat sticky marbles.
Read 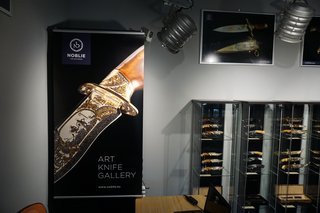